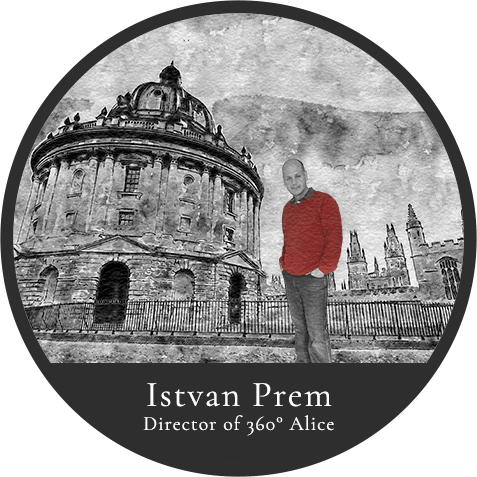 From Oxford University to 360° Alice in Wonderland

The 360° remake of Alice in Wonderland is the brainchild of the Oxford based artist Istvan Prem. He is also the founder of Turl Book Ltd.

Istvan soon realised that the 360° format has way more potential than making street view images. When it’s done properly, 360° is the most fascinating art-form for creating immersive eBooks and playful viral content. And that’s how 360° Alice in Wonderland was born, which is an interactive remake of the original Alice’s Adventures in Wonderland book.

Have a question for us? Let us know & we will respond within 48 hours!

Fill out this form to get in touch with our team. You can also send us an email directly to the address below.

email us and we'll call you back

Thank you! We will get back in touch with you within 48 hours.
Oops! Something went wrong while submitting the form.

So what exactly are 360° degree eBooks?

A 360° eBook is like a traditional eBook but many of the illustrations come to life in 360° with musical narration. The way it works is simple: just install our software, and start reading the text as you would do in a traditional eBook. However, you will soon find illustrations that turn into a 360° experience when you click on them. And you can listen to film quality musical narrations while enjoying the immersive 360° pictures. The narrations are short snippets from the corresponding chapters, and they don't cover entire chapters. You can think about the musical narration as a teaser into the story. It really is a magical experience. The 360° Alice in Wonderland is 83 pages long, and it has over 23 illustrations that come to life in 360°, and it also has over 60 other interactive illustrations. It's probably the most engaging eBook you have ever seen.

The advantage of 360° eBooks

In the age of video games, it’s difficult to motivate children to read classic literature. That’s why we’re excited to launch our interactive 360° Alice in Wonderland, the world’s first 360° degree eBook. This approach makes the famous classic fun and engaging for children. And 360° Alice is so entertaining that adults will also enjoy rediscovering Alice’s Adventures in Wonderland.

With the recent surge of interest in virtual reality technologies and applications, there has been a corresponding increase in the demand for immersive learning. Educators can take advantage of this trend by using our 360° Alice in Wonderland during exercises or lessons. By incorporating 360° technology into educational materials, we can provide students with an immersive experience that encourages active learning and comparative exploration.

Learn More
Thank you! Your submission has been received!
Oops! Something went wrong while submitting the form.
About usFeaturesUser ExamplePricingResources